Gail Duff has been a folk educator for over twenty years. She began by running the Wealden Folk Project in a small area of East Sussex (1991- 92) and developed this into TRADS in 1993. Since then she has led and facilitated traditional arts projects in school and community settings for all ages and abilities.

Gail is a Morris dancer, traditional singer, musician and ceilidh caller of many years standing and both organises and takes part in traditional plays and customs throughout the South East. She was once a part of the team that ran the Rochester Sweeps Festival and that originated the Faversham Hop Festival.

Gail’s workshop specialities are traditional song and song writing, all types of English traditional dance, folk drama, story telling and calendar customs. She runs music and song sessions for under fives, and has an Advanced Certificate in Early Years Music and Movement. She works with both children and adults with special educational needs and disabilities. She has considerable experience in researching, writing and directing plays and performances relating to place, myth and landscape.

Gail designs and makes costumes and props for performances and runs making workshops in school and community settings, often as part of a combined arts project.

Gail originally trained as a Speech and Language Therapist at the Central School of Speech and Drama. She is now a practising Holistic Voice Therapist, using voice and song in workshop and one-to-one settings for health and well-being.

Lucy Duff is a fiddle player, traditional dancer and singer. Since the age of two, she has been taking part in a wide spectrum of folk traditions and customs, including Border Morris and traditional drama. She currently plays in a number of folk bands and a string quartet.

Lucy teaches music, song, dance and taditional drama and runs a community folk band. She assists in the research, writing and direction of community plays based on landscape and heritage.

An artist with a first class degree in textiles, Lucy also runs community and educational workshops in art and textiles, and prop and costume making. She makes and sets up decor for music and theatre events and festivals. 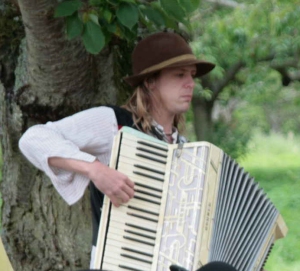 Nick has been teaching music since the age of sixteen, when he began teaching the piano as a private tutor. He studied Music Production at Thames Valley University, and has an Advanced Certificate in Early Years Music and Movement. He plays keyboards, synths, guitar, trombone and accordion and has experience of performing a wide range of musical genres including folk, rock, jazz, orchestral and electronic music. He currently plays in a folk duo, a ceilidh band and an audio visual live act.

Nick runs workshops in junk music, studio music, music technology, song writing and music and movement based on Dalcroze tecniiques of music teaching. Besides working for TRADS, Nick has worked at the London Society for the Blind, and the Orpheus centre.

He is part of a team that makes and sets up decor for music festivals.